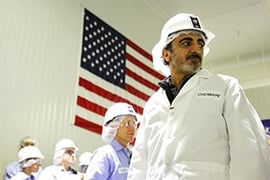 If you have been following the Sochi Winter Olympic games you may have noticed the commercials by team USA sponsor Chobani. The Olympic tie in is a natural fit for the Greek yogurt company. Founder Hamdi Ulukaya wanted to create a yogurt that was healthy and delicious with a nod to the Turkish style of yogurt he ate growing up. Ulukaya is an American success story.

After moving to the United States to learn English in 1994, he started Euphrates a feta cheese company. His passion for making authentic and delicious foods were realized on a large scale when he purchased an 84 year old Kraft yogurt factory. He purchased the plant in 2005, made upgrades and spent the next 18 months perfecting his recipe.

But did you know that Chobani uses Microsoft Dynamics CRM to manage its relationships, whether business-to-business, business-to-consumer, or even business-to-employee? Real time data from the system enables the rapidly evolving company to collaborate and keep everyone in touch with the founding principles.

In fewer than ten years, Chobani grew from 5 employees in an upstate New York factory to more than 2,200 employees across all locations.

His original plant, in upstate New York, has 1,300 workers who work tirelessly to produce more than a million cased of yogurt each week. Because of Chobani’s success, they now have plants in Idaho and Australia.

Ulukaya’s recipe for success. He reveals what made and will continue to make him successful in an interview with Bloomberg Businessweek.

“We focus on the one cup of yogurt,” he says. “We stayed close to the plant. We are very good food manufacturers—that’s who we are. We are makers.”

Greek yogurt has soared in popularity and now accounts for 36 percent of the $6.5 billion in total U.S. yogurt sales, according to investment firm AllianceBernstein.

The stability and agility of Dynamics allows the company to manage growth while remaining true to their values.