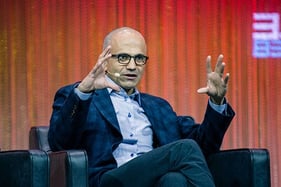 Satya Nadella was announced as the third CEO of Microsoft on February 4, 2014.  Nadella previously held the position of Executive Vice President of Microsoft’s Cloud and Enterprise group.  In light of the transition, Bill Gates will step into the new role as Technological Adviser and John Thompson into the role of Chairman of the Board of Directors.

Nadella, an avid fan of cricket and poetry, has been with Microsoft for 22 years and has a reputation of being “top notch intellectually and very talented technically.”

One thing is for certain, he values continued education. An article: 8 Things Worth Knowing About Microsoft's New CEO Satya Nadella points out that he is a hyper-educated guy. Having received his Bachelor of Science in electrical engineering from Manipal University. In the U.S. he received a master’s degree in computer science from the University of Wisconsin, Milwaukee and then earned an MBA from the University of Chicago.

Nadella believes in the power Microsoft has to make a positive impact on the world. While many companies want to make a change, not all have the ability to do so. “Very few have all the elements required: talent, resources and perseverance.”

Bill Gates is championing the decision.

“During this time of transformation, there is no better person to lead Microsoft than Satya Nadella,” said Gates, Microsoft’s Founder and Member of the Board of Directors. “Satya is a proven leader with hard-core engineering skills, business vision and the ability to bring people together.

Cloud Computing Comes to the Forefront

Last year, Nadella began running Microsoft’s cloud computing and business platforms. In an article by BBC News, Paul Kedrosky, a Canadian venture capitalist, believes that experience in cloud development will be “hugely significant.”  Nadella sees the future of Microsoft as being services, not software centered.

Rupert Goodwins, a British technology journalist, points out the significance of this appointment in the same BBC article.

“Nadella is a cloud man. He’ll have a chance of weaning Microsoft off its addiction to expensive licensing fees for software that people don’t want or actually use.”

This brings up the often debated issue of which is better, more flexible or more cost effective- cloud or an on-premises option.

When considering cloud or on-premises for your software options we recommend evaluating what is best for you. Find out more about the strategic, financial, operational, technical and vendor options.  An article, The Cloud vs On-Premises Software: What you Need to Consider for Your Business, offers valuable insights into the types of questions you should ask.

If you have any questions about software selection, feel free to reach out to us. Be sure to find us or Twitter @DatixInc and connect with us on LinkedIn for more news and company updates.