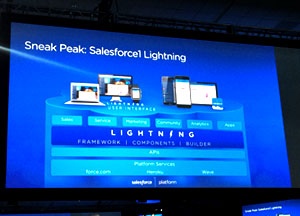 It’s a pretty exciting time to be a developer – especially a Salesforce developer. Salesforce recently debuted Salesforce1 Lightning at their annual Dreamforce conference, which I was lucky enough to attend, and see what they had in store for those interested in business apps.

The Lightning update promises value for both developers and business users alike.

Salesforce Lightning, a collection of tools and technologies which includes the Lightning Component Framework and the Lightning App Builder, is being touted as the next generation of the Salesforce1 Platform.

With the Lightning App Builder Salesforce allows you to build responsive enterprise applications for a variety of devices including mobile, desktop, and wearables such as smart watches. Developers and business users can create off-the-shelf apps or apps from custom-made components. The app builder will be released in beta February 2015.

With the app builder, I can essentially create (using Lightning Components and the flexibility of Salesforce) the perfect enterprise app for any client or for my company to use internally. This ought to make my clients very happy because I will be able to get the app up and running in a relatively short amount of time.

Business users are going to love how simple it is to create apps. Salesforce allows you to build custom interfaces without having to write code. You can even visually create the app using the drag and drop components.

Lightning Components are reusable, self-contained user-interface elements used to create Salesforce apps. From these, you can quickly and easily create apps for the custom CRM system you want.

I saw some pretty cool examples of the custom components. For example, Salesforce demo’d a pH meter and a real time temperature monitor. Each of these were then added to a full-blown application. Both examples were built with AngularJS (an open-source web application framework), which means developers can create more flexible components.

Overall, I am excited about using Lightning components. As more companies want to create custom apps there were be plenty of opportunities to create really cool solutions that truly add value. Salesforce is making it possible to create the ideal CRM system for any device.